Corruptrons are the enemies of the Bricktrons which start attacking on the first night on Survival Mode. They come in waves to reach the large, blue crystal and seek to destroy it. Any defensive Bricktron that protects the crystal will be attacked. Corruptrons also throw rocks at Bricktron Archers.

They appear to be rock-like humanoids which have rough, spiky rocks protruding from their backs. The larger corruptrons have a stronger build due to their massive damage. Most Corruptrons appear to have an under-bite or a big jaw.

A brightened photo of Corruptrons from the trailer 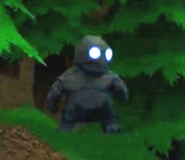 A brightened photo of a Corruptron from the trailer.

A Corruptron attacking from behind.

New Corruptron
Add a photo to this gallery
Retrieved from "https://castlestory.fandom.com/wiki/Corruptron?oldid=4861"
Community content is available under CC-BY-SA unless otherwise noted.